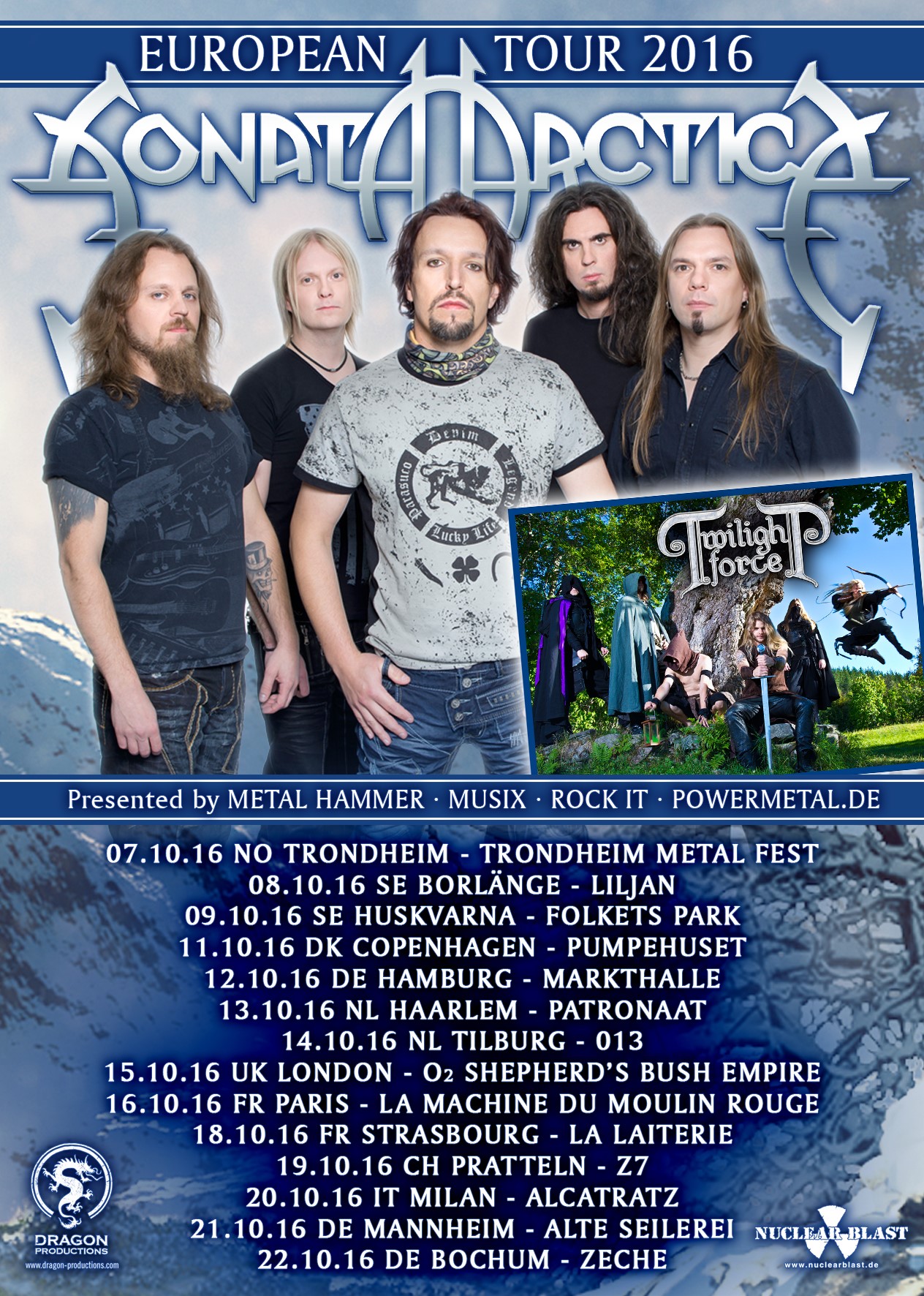 “We are the music-makers, we are the dreamers of dreams.” – Arthur William Edgar
O’Shaughnessy (1844-1881)
SONATA ARCTICA are no strangers to having fans cross several state lines to meet them, or to making entire venues sing themselves hoarse when they play their high-speed, keyboard-laden, and righteously melodic heavy metal music. Stirring up youth in the hearts of many and acting like a sonic beacon for fans seeking the ultimate adrenaline high, Finland’s ambassadors of light and hope have toiled through difficult times long enough to harvest an award-winning career. Naming the new album after the Finnish word for “dreams,” Unia takes a decidedly progressive and theatrical direction. For founding member / lead singer / lead lyricist Tony Kakko, this creative freedom was inspired by a “thinking outside the box” episode with a song he wrote for Finland’s Agnes Pihlava, the winner of Finland’s televised talent competition Idol Star (their equivalent of American Idol) in 2005. But before moving forward, let us go back to when things began…
Formed in 1996 in the forested northern hamlet of Kemi, Finland (population: 23,000) with core members Tony Kakko (vocals & keyboards), Jani Liimatainen (guitar), Marko Paasikoski (guitar), Tommy Portimo (drums) and Pentti Peura (bass), the band initially known as Tricky Beans managed to produce three demos: Friend Till The End, Agre Pamppers, and PeaceMaker. After a line-up change and prior to recording their fourth demo, Fullmoon, Tricky Beans changed their name to Tricky Means. When Fullmoon secured the band a Spinefarm Records deal, the band underwent their second – and final – name change to SONATA ARCTICA. After 1999’s Ecliptica (recorded at Tico-Tico Studio) was released, vocalist and then-keyboard player Kakko opted to focus solely on singing & songwriting, bringing Mikko Härkin into the fold to transform the impact of the band’s live shows. Besides the completion of Silence (their second album also recorded at Tico-Tico Studio), among their accomplishments in 2001 were being chosen as “Best Newcomer” by the Finnish Recording Industry Association (FRIA); opening for Alice Cooper, Dio, and Ratt on the Finnish leg of the Monsters Of The Millenium tour; performing at the prestigious Wacken Open Air festival; a successful Japanese tour; and touring Europe with Gamma Ray – one of Germany’s most well-known power metal bands. To thank their Japanese fan base (who purchased over 30,000 copies of Ecliptica), SONATA ARCTICA released their career’s first live album in 2002, Songs Of Silence, which captured their 2001 performance in Tokyo. With Härkin’s departure at the end of the tour, SONATA sought out a new keyboard player and chose Henrik Klingenberg after interviewing him in a bar (!). While Kakko and Stratovarius’ Jens Johansson covered the keyboard duties on 2003’s Tico-Tico Studio offering, Winterheart’s Guild,  Klingenberg’s live work was put to the test at SONATA’s eight sold-out shows in Japan, tours through Finland and France, and the summer festival circuit in Europe. The band’s first single off Winterheart, “Victoria’s Secret,” knocked Eminem out of the running to secure the coveted title of “#1 Single” in Finland. Winterheart’s Guild not only went on to become a Top 10 album in their homeland, but also paved the way for their signing with Nuclear Blast, receiving another Emma Award nomination from FRIA, and opening for Iron Maiden in Japan. With peak momentum, SONATA returned to Tico-Tico Studios in Kemi to record their fourth album, Reckoning Night, with mixing duties held at Finnvox. Their first single, “Don’t Say A Word” shot immediately to #1 on the Finnish Singles chart and stayed on the Top 10 charts for six weeks. The album ranked #2 in Finland, #68 in Norway, #77 in Germany, and #85 in Switzerland. Festival appearances at Finland’s Tuska Open Air, Germany’s Summer Breeze, and the U.K.’s Bloodstock were all warm-ups for SONATA’s arena-style “Finnish Invasion” tour through Europe with their countrymen (and woman) in Nightwish. “Addictive, monstrously uplifting, and criminally polished,” wrote Terrorizer Magazine, “SONATA ARCTICA make the kind of metal that makes you want to stand in the prow of a long ship, pointing dramatically at a distant horizon…”
After receiving word that their second album, Silence, went Gold, SONATA ARCTICA embarked on another Finnish tour, and then set their sights on touring North America with Nightwish. Despite the latter tour’s cancellation, the band still played nine East Coast shows, including a performance at the New England Metal & Hardcore Festival. Judging from the audience response, a headlining tour was in order. In December 2005, Winterheart’s Guild achieved Gold status in Finland, and SONATA ARCTICA celebrated by treating North American fans to sold-out shows and audience sing-alongs in January and February 2006. While on tour in the U.S., 2004’s Reckoning Night became their third certified Finnish Gold album and netted over 100,000 copies sold worldwide. Showcasing their live showmanship, the band released their first DVD, For The Sake Of Revenge, in 2006, transporting all SONATA ARCTICA fans present at Shibuya AX in Tokyo, Japan on February 4th & 5th, 2005 into the standing room only crowds of the touring & backstage worlds they inhabit. Even with an honored recipe for success, SONATA members would rather risk an ambitious shift than to become complacent in their songwriting. While the band could have easily written Reckoning Night Revisited, Unia demonstrates how change is food for the soul and how as a relatively young band, they still have an endless supply of musical styles left to explore. Featuring a bouzouki on “The Harvest,” one could argue that an exotic guest instrument does not necessarily make an album progressive; the instrument’s presence is significant more for the challenge and inventiveness it represents. Still recognizable are Kakko’s emotive vocals (“Paid In Full”), Klingenberg’s   keyboards racing along with Liimatainen’s guitars (“In Black And White”), recognizable lyrical themes (“Caleb”), and even the reappearance of SONATA’s ever-present wolf mascot in “It Won’t Fade.” Landing a Number One Single in their homeland with “Paid In Full” and beating out Ozzy Osbourne (!) on the Finnish charts to secure the Number One Album, SONATA ARCTICA are a textbook example of how dreams can be put into action, what dreams can help you achieve, and why dreams are worth believing in.