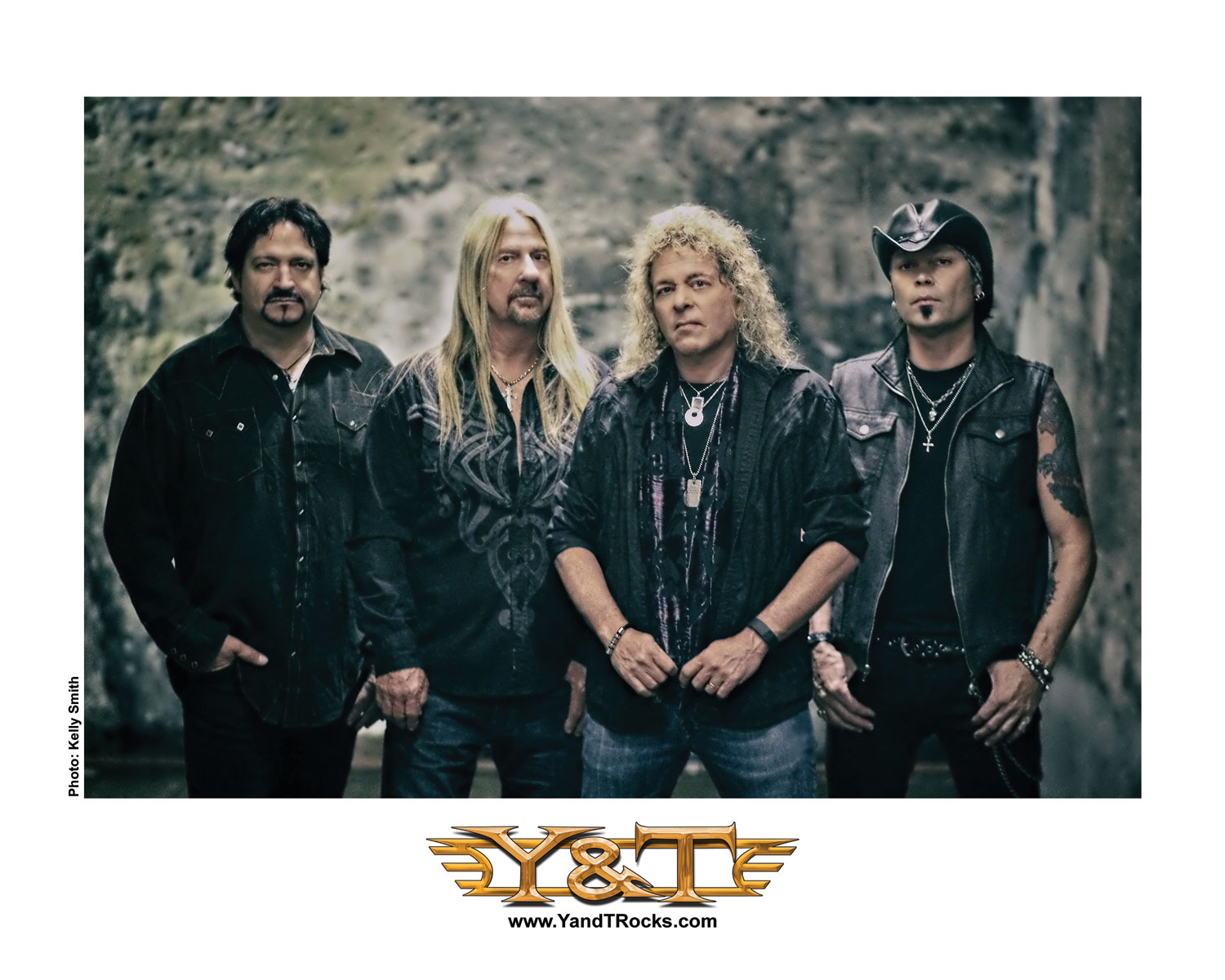 Before Mötley Crüe, before RATT, even before there was a Metallica, Y&T was slogging away in sweaty rock clubs around America. When the band formed in the early 1970s, little did they know they would set the standard for hard rock bands that trailed. Many of the biggest acts of the ’80s became popular opening for headliners Y&T—and cut their teeth on the band, as evidenced by the Y&T mentions in tell-all books by acts such as Metallica and Mötley Crüe.
Born in Oakland, California, Y&T is one of the San Francisco Bay Area’s own innovators of the hard rock sound. Whether performing to a festival crowd of fifty-thousand or in an intimate nightclub, Y&T’s high-energy set and passionate performances still captivate legions of fans around the globe, proving Y&T’s music timeless.
Originally formed as Yesterday and Today, the initial powerhouse quartet—featuring Dave Meniketti (lead guitar/lead vocals), Phil Kennemore (bass), Leonard Haze (drums), and Joey Alves (rhythm guitar)—tore through the ’70s and ’80s with their own brand of hard rock. After two ’70s albums on London Records, they shortened their name to Y&T and released eight albums on A&Min the ’80s. Two more albums with Geffen Records marked an era of change with Jimmy DeGrasso (Alice Cooper, Suicidal Tendencies, Megadeth) on drums and Stef Burns (Alice Cooper, Berlin, Huey Lewis) on guitar.
With a discography of 18 albums, four greatest hits collections, plus a box set, Y&T have sold over four million albums since their 1974 inception. The band’s most recent single „I’m Coming Home“ has climbed to roughly 1.5 million views on YouTube. Y&T received extensive airplay with hits such as Forever, Rescue Me, Mean Streak, Don’t Stop Runnin‘, and Summertime Girls—which played in heavy rotation on MTV. Y&T songs have been featured in a multitude of movies and television shows, including Real Genius, Out of Bounds, Baywatch, and Hunter. After five top 100 albums, songs that tipped into the 40s, two Bammie Awards, and many international television appearances, Y&T’s hits are still played on VH1 Classic and Classic Rock radio stations worldwide.
With Kennemore’s untimely passing from lung cancer, the band carries on the legacy that is Y&T. Y&T continues to tour the world, featuring the dynamic original frontman Dave Meniketti (guitar/lead vocals), John Nymann (guitar/vocals), Aaron Leigh (bass/vocals), and Mike Vanderhule (drums/vocals), playing songs that span the band’s five-decade career and including all the hits and fan favorites. Prepare to have your face melted.

Praying Mantis
2016 will be a special year for Praying Mantis who will be celebrating 35 years since the release of their iconic album `Time Tells No Lies`. Regarded as a classic with its `catchy & unforgettable` melody, it is one of the few albums of its kind that has stood the test of time. Together with tracks from their 2015 Frontier Records release `Legacy` (which received great reviews worldwide), these will form the main basis of the live set. The band is currently working on delivering a unique experience with songs that have not been played since 1982 and never likely to be played again. The energy, power and production will take the audience back and forth from 1981 to 2015 giving incredible nostalgia as well as showcasing new material. With the resurgence in interest of the NWOBHM movement, who better than one of the top 10 bands of its time and this genre? Praying Mantis coming soon across Europe.