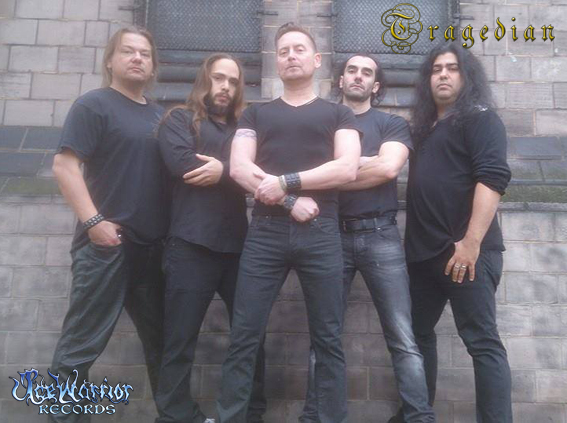 Formed on August 29 2002 in Hamburg,Germany by guitarist,songwriter & producer Gabriele Palermo.The idea behind was to form a band with Gabriele’s favourite musical elements,Power,Speed,Heavy,Melody and Musicianship but in a format that anyone can listen to.Drawing inspiration from such bands as Dio era Rainbow,Deep Purple,Dokken,Ratt,Fifth Angel,House Of Lords,Iron Maiden,Black Sabbath & Stratovarius and such solo artists as Yngwie Malmsteen,John Norum,James Byrd and David Chastain.Since the bands formation all musical activities was overseen by Gabriele whether it’s songwriting,producing or live shows to ensure the right path is taken.Tragedian has shared the stage with known bands as Paragon,Pagan’s Mind,Mob Rules,Eternal reign and embarked on their first tour of Scandinavia in March 2009 with Burning Point, & Cryonic Temple.
After the release of the long awaited debut „Dreamscape“,Mk III Tragedian was no more as personal issues,family and other comitments came to a head and desicions had to be made.Since a tour was already in the works Gabriele reached out to ex singer and friend Patrick Van Maurick to step in and do the tour.The tour got underway with the rythem section and keyboard player from Burning Point Supporting Tragedian.After 14 days on the road together,back in Hamburg Gabriele started working on the follow up to „Dreamscape“.First on the list was to find a new line up.Before the year was over,Tragedian Mk 4 is now confirmed as vocalist Val Shieldon (ex Oracle sun) , bassist Steve Vawamas (ex Shadows Of Steel) and friend and keyboardist Dany All (Synthphonia Suprema,Fogalord) and have commenced work on the next cd.
August 31 , 2013 see the release of „Decimation“ along with a new line up.

Osukaru is the brainchild of Swedish guitarist, keyboardist and songwriter Oz Osukaru who wanted a melodic rock band delivering not only good music but an entire „all inclusive“ AOR experience with the music, image and artwork – all being well thought out.

The band have been consisting of various constellations but the current line-up is by far the most interesting. Having both male and female vocals on top of a big AOR soundscape where edgy hard rock guitars, atmospheric keyboards and a slick saxophone comes together makes the music of OSUKARU something special for every fan of melodic rock.

On their new mini-album „Transition“ we get everything from solid AOR to classic hard rock mixed with a slightly progressive edge, along with some re-recorded favourites from their earlier releases. The album was mixed and mastered by Attila Bokor (Morph, BOA) and Kevin McNoldy (Dave Matthews Band, Backstreet Boys) who together brought out the biggest production yet on an OSUKARU release.

Disguised in the eternal haze out on the Ocean lies the secret realm of Atlantica. A city once divine but crushed by the gods for its inhabitants‘ growing averice.
After eleven thousand years at the bottom of the sea, the water god Poseidon finally showed mercy and the city rose back to the surface.
There the people built up a new society and used their wisdom to develope advanced technology, superior to the world’s era.

Terra Atlantica was founded in December 2014 when drummer Nico and guitarist/singer Tristan, who knew each other from a former band, decided to start a new project.
They began writing songs and completed their crew with bass player Nick and guitarist Mike.
Soon the concept of singing about Atlantis and other nautical themes evolved and a demo containing three songs was recorded.
Finally they could emerge on the world’s power metal scene and begin their glorious quest.