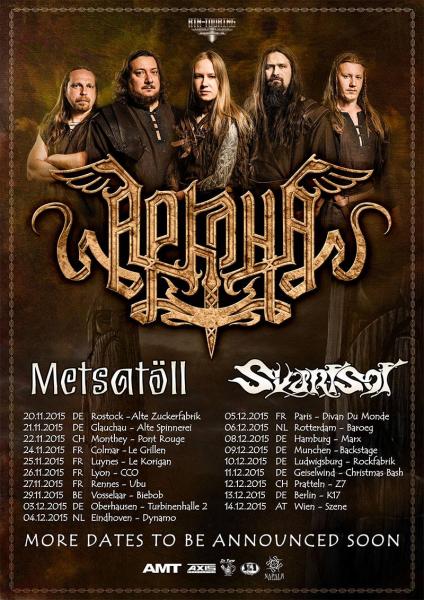 Initially the band was called Hyperborea and consisted of Maria ‚Scream‘ Arhipova and several local musicians. February 2002 the band was renamed into Arkona. The musical concept was pagan/folk metal and lyrical inspiration was found in ancient beliefs and history of Slavonic Russia.

In the end of 2002, Arkona recorded its debut demo at CDM-Records studio in Moscow. Unfortunately shortly after the demo recordings several band members lost their interest. September 2003, Arkona broke up. Maria decided to continue on herself and asked the members of her side project Nargathrond for help.

Maria wrote all the orchestration and during March 2004 she recorded the Arkona debut album ‚Vozrozhdenie‘ (The Revival) with the assistance of members from well know Moscow band (Sergey ‚Lazar‘ on guitar, Ruslan ‚Kniaz‘ on bass and Vlad, drums). Arkona’s musical direction can be described as pagan/ folk metal, covering the metal spectrum from elegant, almost gothic parts to fast and furious pagan metal. Never chaotic, always catchy and very melodic. Several songs on the Arkona albums feature authentic Russian Folk lyrics and music.

Immediately after the recordings, Maria wrote several new songs and by the end of summer 2004 all the songs for the second album named ‚Lepta‘ were ready. It was recorded the following autumn with the same musicians.

The album ‚Lepta‘ was released in December 2004 and featured the same old themes from their debut ‚Vozrozhdenie‘. The album had a guest role for vocalist Les’yar ( Nevid‘, ex-Butterfly Temple ), not only as a singer, but he also wrote lyrics for the song ‚Zarnitsy Nashei vobody‘.

During summer 2005 the band started recording their third album, ‚Vo Slavu Velikim‘ (For the Glory of the Great), their most complicated and varied album thus far.

On this album Arkona decided to give up on using synthesizers and used only real ethnic authentic instruments like gaita, din whistle, low din whistle, sopilka and vargan. One of the invited musicians on the third album was the famous Rusian folk-musician Vladimir Cherepovskiy (Mervent, ex-Voinstvo Sidov, Veter Vody) and members of bands as Svarga and Alkonost. In September 2005 the album went gold in Russia.

During one of their many live performance Arkona recorded their debut DVD ‚Live For The Great‘ and also released their live album ‚Zhizn‘ vo Slavu‘ (Live for the Great) on which the debut demo tracks were added.

All albums are recorded, mixed and mastered at CDM Records in Moscow, Russia. Produced by Masha Scream and Sergei Lazar. Vic Records bought the rights of all Arkona albums and will release these world wide.

Arkona was an ancient Temple Fortress on the former Slavic Island of Rugia (nowadays known as RÃ¼gen, Germany) in the Baltic Sea. The temple was dedicated to the ancient Slavic God Svantevit, the four-headed God of war, fertility and abundance. Svantevit had two heads at the front and two at the back and had his characteristic horn of abundance.

In 1168 AD, Arkona was destroyed by Danish invaders.