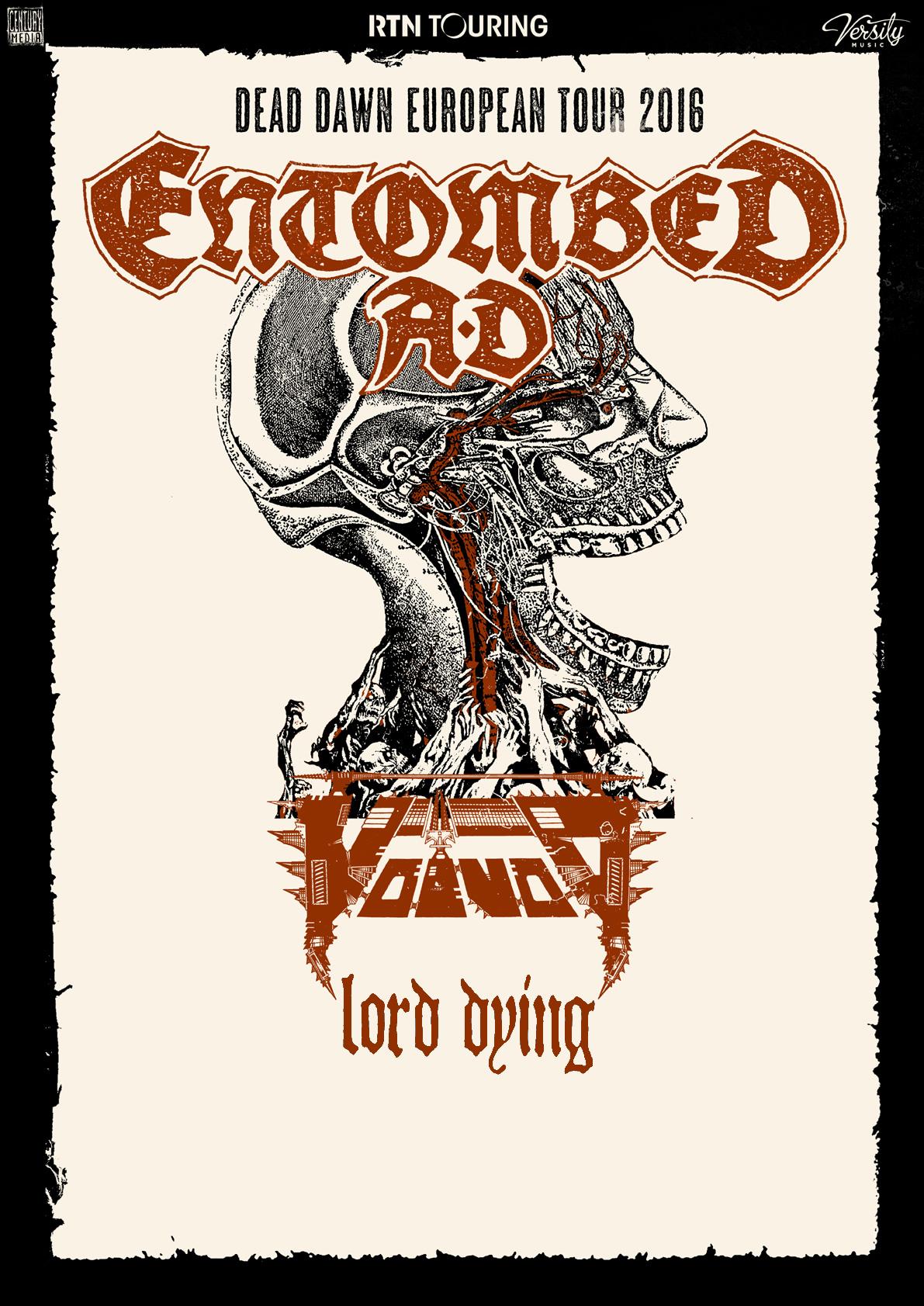 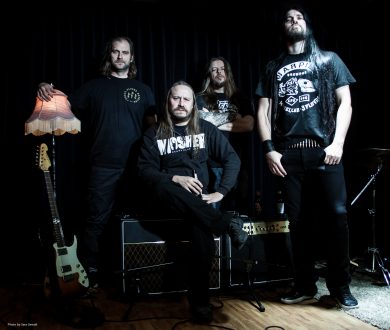 “For those about to rot, we salute you!” says Victor Brandt (bass/backing vocals) and welcomes you to “Dead Dawn”, the second full-length by ENTOMBED A.D. “It feels great to be able to release a new album again. It turned out even better than I could hope for. The production is great, the songs are killer, and the band is tight and hungry. And with all the plans we have for 2016, it’s going to be a great year!”

If you don’t know ENTOMBED A.D., the deadly sonic force fronted by former Nihilist/Entombed vocalist L-G Petrov, well, then you’re either no metalhead, slept under a rock since the late 80’s or have already gone the way of all flesh with crawling swarms of maggots deliciously peeling every single bit of meat from your sorry bones.
To save you some precious time for listening to this record rather than wasting it for googling, here’s a quick historical breakdown nonetheless: ENTOMBED A.D.’s legacy goes way back into the year 1987 when the band originally formed under the name Nihilist. In 1989, the group changed its name to Entombed and together with Morbid (for whom singer L-G played drums), Treblinka/Tiamat, Grave, Unleashed, Dismember, they established themselves as masters of Swedish death metal before flavoring the trademark “Stockholm sound” with a more punkish, rocking edge that culminated in the ultimate death ‘n’ roll classic “Wolverine Blues” in 1993, an album still very much present in the band’s current sound.

Just like its 2014 predecessor “Back To The Front”, the commando’s newest strike, “Dead Dawn”, does not rehash the early, pure death metal nor the softer leanings of Entombed in the late 90’s, it proudly sports the filth, the roll, the death, the goddamn dose of heaviness you need, expect, and wish to hear from this pack. And, it has L-G Petrov, whose glorious, whiskey-drenched roar thrones above the musical fundament like a mad, deranged king bellowing his lunatic commands! From the classy death metallic opening riff and irresistible drive of “Midas In Reverse”, the powerful groove of the title track or “Silent Assassin”, the beyond cool Randy-Rhoads-tribute-riff and morbid twist of “The Winner Has Lost”, the full-frontal-Autopsy-like assault of “Black Survival”, ENTOMBED A.D. hit harder, more immediate as on the previous opus albeit implement some smart surprises. Just take the bluesy twang on “As The World Fell”, the captivating guitar melodies garnering “Down To Mars To Ride”, the sickened ballad “Hubris Fall”, which reminds of Entombed’s ingenious Roky Erickson cover, “Night Of The Vampire”, and unbeatable, fast-paced nonchalance of “Total Death”.
Nico Elgstrand (guitar/backing vocals) comments the creation of “Dead Dawn” as follows: “I think it is safe to say that all of us in the band feel like we just have given birth to one tank each. Meaning the pregnancy and delivery was everything but pleasant! Still, when watching our newest offspring play with their cannons and bombs, blasting everything around them to bits, we feel, just like any parent, pride and joy and wouldn’t have it undone for all the money in the world!”

Rounded off by a striking cover artwork created by Watain-frontman Erik Danielsson, and backed up by a versatile production team consisting of Tom Van Heesch and Jacob Hellner of Big Island Sound, Stockholm as well as Nico Elgstrand himself, who produced a majority of the tracks whereas Svante Forsbäck of Chartmakers mastered this new beast, “Dead Dawn” looks and sounds great, too.
Following a successful live campaign around “Back To The Front” including an European tour with Grave in 2014 as well as tons of festival appearances, ENTOMBED A.D. shall hit the road again shortly before releasing “Dead Dawn”. First up is the Europa Blasphemia tour in January/February 2016 with Behemoth, Abbath, and Inquisition, followed by an extensive US run with Amon Amarth in April/May, Hellfest (FR), Wacken (DE), Summer Breeze (DE), and more. A schedule just fitting nicely to Victor’s promise for 2016: “Now we’re gonna tour, play festivals, tour even more, and already start working on the next album.”

It seems that after returning to the front in 2014, ENTOMBED A.D. are now way more comfortable with the arsenal at hand and the quartet is more eager than ever to live up to the finest line from the track “Total Death” – “It’s only rock ‘n’ roll – DESTRUCTION!” 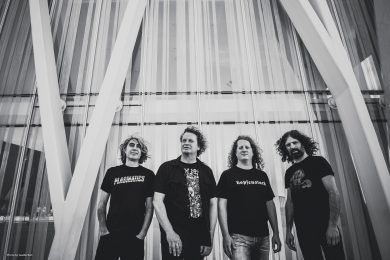 VOIVOD’s career path has endured as many shifts and disturbances as the music itself. From major label deals and big-time tours to slogging it out in clubs while metal went through growing pains in the mid 1990s; from high profile bass player ex-Metallica man Jason Newsted to Eric Forrest, who pulled double duty as bassist and vocalist in the mid/late ‘90s. Both men departed from the band by varying degrees of accident and physical injury. The Quebecois prog metal pioneers have persevered through thick and thin to arrive at a comfortable place in 2012 — a place of rebirth, rejuvenation and respect.
VOIVOD’s various lineups have often revolved around the changing of bass players. In the mid ‘90s, bassist/vocalist Eric Forrest entered the fold to make the band a trio for the first time. After two albums, a collection called Kronik and the Voivod Lives live set, Eric was laid up to do a van accident incurred during a road jaunt. Several years later, ex-Metallica bassist Jason Newsted did his part to help revitalize the band again, and after 2003’s VOIVOD S/T album, an extensive stint on Ozzfest and supporting Ozzy on an arena tour. The band’s Mark IV lineup is as good a lineup as could exist without original guitarist and chief riff catalyst Denis “Piggy” D’Amour. His tragic passing in 2005 threw the band into a period of hiatus, and it was only an event of such unthinkable gravity that could bring surviving members Denis “Snake” Belanger and Michel “Away” Langevin back together with bassist Jean-Yves “Blacky” Theriault.
Estranged after disagreements during the recording of 1991’s Angel Rat, Blacky — who handled “blower” bass for the band since their formation in 1983 — came back to the fold in 2008. When the three surviving members decided to keep the legacy of Piggy alive, there happened to be exactly one perfect match for the job: Daniel “Chewy” Mongrain. A veteran of tech-death monsters Martyr, the very first metal album Mongrain owned was VOIVOD’s 1987 album Killing Technology, and his first live metal show was seeing that very same band in 1990. Mongrain grew up on VOIVOD. He worshipped and eventually learned Piggy’s innovative techniques. He looked up to his local heroes, and his band even covered VOIVOD’s “Brain Scan” in 2006, which also featured Blacky himself on guest bass. It was a collaboration that served as the testing ground for both men to join/rejoin the VOIVOD fold in the coming years.
Once Piggy’s final recordings were made into albums with Jason, Snake and Away working to cobble together the demo’s they had written together (2006’s Katorz and 2009’s Infini), a revitalized VOIVOD hit the road, largely as a means to keep Piggy’s music alive, to celebrate all that VOIVOD had meant to so many fans around the world. After several jaunts through North and South America, Europe and Japan, the new lineup began itching to do more than just exist as a tribute to itself. A new song, “Kaleidos,” began showing up in live sets, and response was positive enough to keep the band writing and driving in the only direction they’ve ever known: forward.
The result of that drive is 2013’s Target Earth album. Recorded at producer Pierre Rémillard’s Wild Studios in Quebec and mixed by Sanford Parker (Pelican, Nachtmystium) the album is out right in time for the band’s 30th anniversary. For this release, VOIVOD’s own company, Iron Gang Factory, joins with global powerhouse Century Media Records for a January 21st/22nd worldwide release. It’s something the band’s diehard fans are eagerly anticipating, and to say the songs of Target Earth run the gamut of VOIVOD’s capabilities would be an understatement. Where “Corps Étranger” steams forward at a frantic clip, so does “Kluskap O’Kom,” the latter more refined and layered, while incorporating what are perhaps the first-ever backup gang vocals heard on a VOIVOD album. On the other side of the spectrum is “Empathy for the Enemy,” a thoughtful art-metal landscape. Several tracks carry the creepy, folkloric vibe of the Angel Rat album; the title track is quintessential VOIVOD sci-fi metal; and strange studio trickery spices up a variety of tracks, lending additional depth to the listening experience. Mongrain’s riffs possess the angular trademark of Piggy’s approach, and the entire band challenged themselves in constructing some
of the trickiest arrangements heard on a VOIVOD album since their Nothingface phase (such as the dizzying changes of “Mechanical Mind”).
But while reference points can be made to previous Voivodian eras, there is more new than old here, and that is the way it has always been with the band. Even the cover artwork is both familiar and brand new. Drawn by drummer Away, as ever, the image of an armored, gun-toting nuclear warrior recalls the band’s 1984 War and Pain debut, but he is rendered entirely differently, while a brand new VOIVOD logo flies above the scene.
VOIVOD’s 30th anniversary celebrates their career as one of metal’s most influential bands. The handful of live albums, reissues and DVDs that began to surface in the past ten years proved how beloved this band really is, and now comes another album of inspired fresh material that proves VOIVOD still have many new paths to travel. What band continues to redefine and reinvent themselves 13 studio albums and 30 years into their career? There is only one answer to that question: VOIVOD.