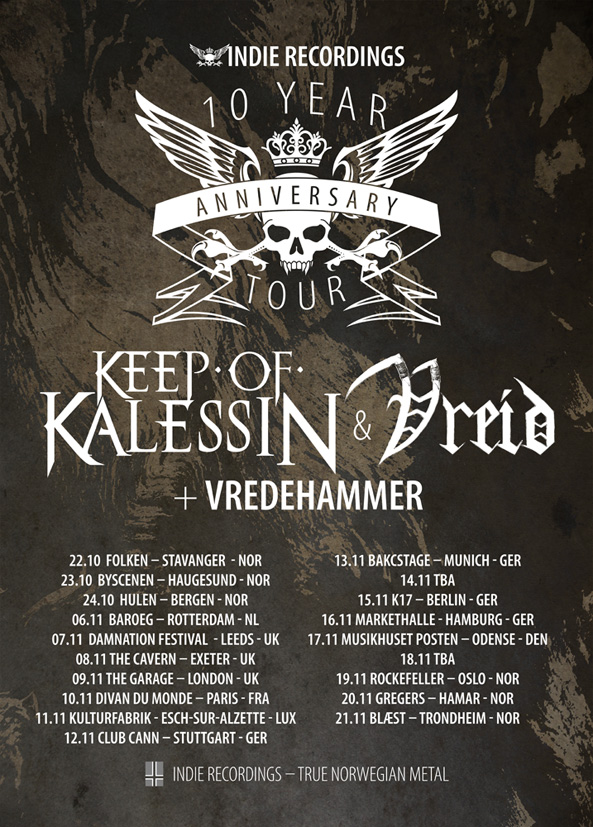 Indie Recordings is renowned for quality releases of Norwegian metal. For a decade they have fronted the Norwegian metal scene will lots of classic albums, and now it’s time for a celebration. This autumn Indie Recordings will celebrate their anniversary with a ”10 year anniversary tour” with 3 of their most spectacular bands. The tour is co-headlined by Keep of Kalessin & Vreid and supported by Vredehammer.

Keep of Kalessin
The undisputable power of these three musical craftsmen reflects perfectly on the band’s most recent recording; Epistemology. Their innovative unique style and technical skills, has gained the band great respect amongst journalists and awarded Keep Of Kalessin an ever growing fanbase around the globe.

Vreid
Since 2004, the pitch black brigade has been marching forward with full power. More than 500 shows, 25 countries and 3 continents have been conquered. In October they will release their 7th album. The reports are that a masterpiece is on its way. Blacker and more majestic than ever, this album will also be their first album since ”I Krig” with lyrics exclusively in Norwegian.

Vredehammer
One of the most exiting extreme metal bands emerging from the Norwegian underground over the last years. This year they were nominated to Norwegian Grammy and toured Europe with Satyricon. This autumn they are ready to attack with a killer new album.