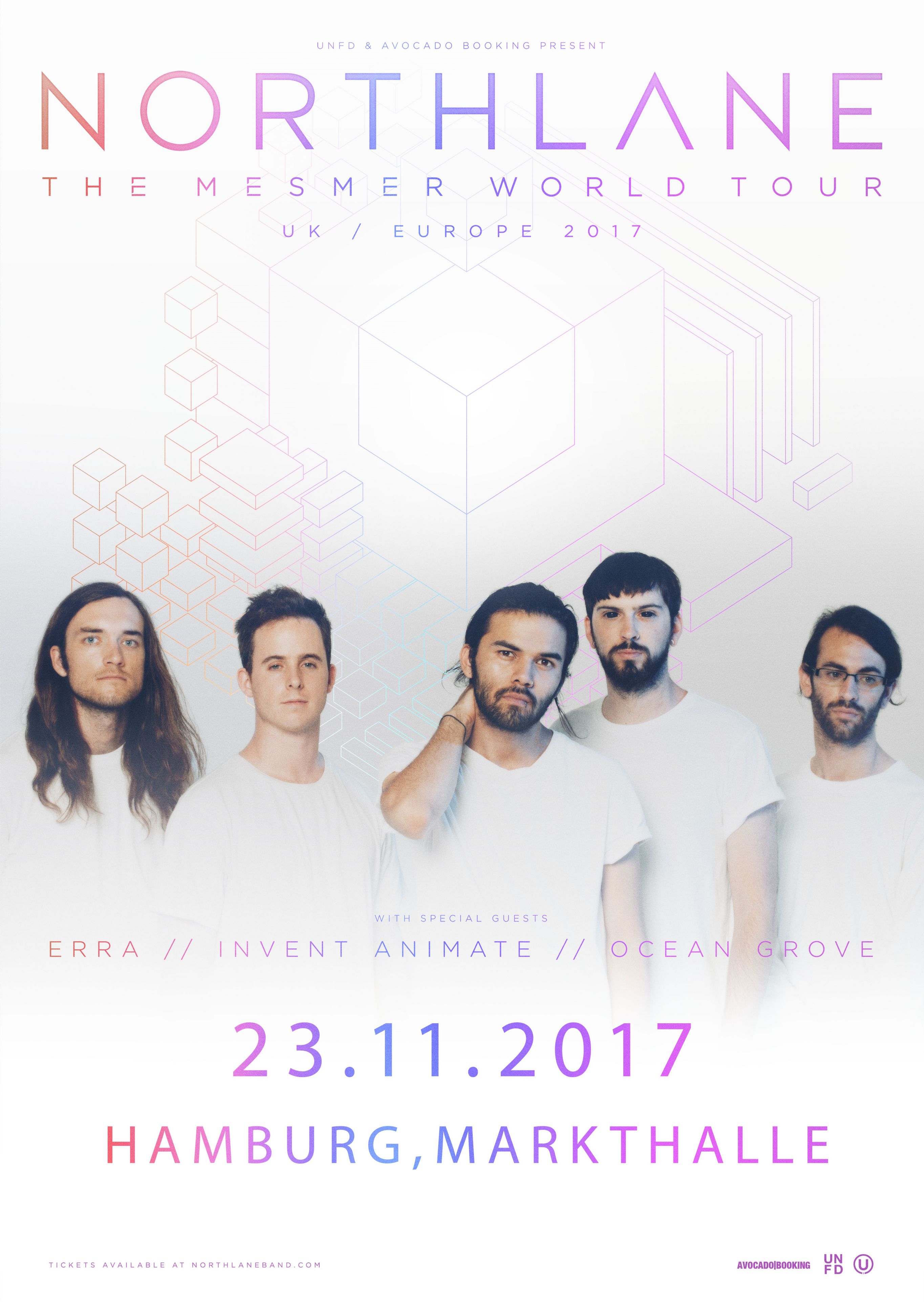 Is the man part machine or is the machine part man?
Mesmer, Northlane’s beautiful new album, represents both sides of the equation.
The band’s most organic yet precise album yet, it covers familiar topics but
renders them in a new way, at once paying heed to the band’s heaviest roots
and looking forward to an unwritten future. It is the fullest and most accurate
expression yet of who Marcus Bridge (vocals), Jonathon Deiley (guitar), Josh
Smith (guitar), Alex Milovic (bass) and Nic Pettersen (drums) really are.
“The album started taking shape around a lyric from Savage – ‘Through the
eyes of the sun’ – which talks about what human society looks like from an
external, objective viewpoint,” says Marcus. “And from there, the writing
became more and more personal but still retained that same sense of context
and interest in the bigger picture.”
“Jon said while we were writing in Germany that we shouldn’t be afraid of
saying what’s important to us, and whether it’s a story about someone who’s
passed away or something broader regarding the state of the world then so
be it,” he continues. “It really is all one and the same.”
The abiding theme of Mesmer (produced by David Bendeth) is magnetism
between all living creatures, something which has its roots in the psychedelic
experience and which has been percolating within Northlane’s consciousness
since the band’s inception. “Was it intentional for Mesmer to be thematically
connected to Node? Definitely not,” smiles Josh. “But we have an album
called Singularity. These ideas have always been there.”
That Mesmer is stalked by death – closing track Paragon deals explicitly
with the loss of a close friend, while Veridian and Fade are also intimately
concerned with bereavement – makes its rhapsodies on life all the more
joyful. Colourwave is a love letter to the act of creation itself, while Citizen
turns the band’s most political statement yet into a plea for unity and Intuition
links personal struggle with a wider responsibility to those around us. Mesmer
is human to its core, and that humanity runs from the bone marrow of its
lyrics to the very way it was created.

Writing began in a familiar fashion as 2015 drew to a close: Jon grinding out riffs
at his laptop alone while Josh wrote new lyrics to develop the themes of Node,
the band’s third album, both their first with Marcus and Northlane’s first #1 on
the ARIA chart. But without any conscious discussion as to why, the band’s
writing process slowly evolved. On previous albums, lyrics and music would
be composed independently and then brought together in the studio; now
words and sounds bounced spontaneously between Jon, Marcus and Josh. This
continued throughout 2016, and a stint between legs of a European tour writing
at the bucolic Ghost City Recordings in Bavaria, Germany bore further fruit.
“Usually the instrumentals don’t change after they’re written, but this time
there was a lot more give and take with the lyrics,” says Jon. “We’re always
asked why we do certain things, but it’s simply that we’re constantly trying to
make things the best they can be. At the beginning, Northlane songs were
born on a computer using tablature software, so to go from that to using
ideas that came out of jamming at soundcheck with Nic is wild. We’ve never
done that before, and that’s why these songs feel a lot more human.”
Spending a week in the German countryside cemented the feel of Mesmer,
both lyrically and musically. Looking back, the band attribute this newfound
fluidity to the writing to being closer as five friends than ever before but
at the time it was simply a natural by-product of spending so much time
together. And then, in September, Northlane did something else new: flew
to New Jersey to let a third party get under the skin of their songs in a way
they’ve never done before.
That someone was David Bendeth, a producer with a track record (Bring
Me The Horizon, Paramore, A Day To Remember) that appealed because
he could get right into the guts of the music and make Northlane the most
compelling version of themselves possible. He and Jon oversaw Mesmer’s
gestation from a few ideas that shot back and forth over email into a manmachine
organo-digital beast.
What emerged from the studio is Northlane’s defining statement. And
presented to their fans in such an unorthodox and exciting manner, Mesmer
will echo worldwide through 2017 and long beyond.