30 bloody years! Who would’ve thought it, eh? As we were well renowned for our, ahem, lifestyle choices, shall we say, I remember Melody Maker ran an office pool betting which member of The Mission would die first. I seem to remember Mick was the favourite with yours truly running a close 2nd. Well, we’re still here, alive and well and still going strong. It seems to me that anyone who survives past the age of 50 in this business these days is given honorary legendary status. It’s cheaply given, in my opinion, but we’ll take it.
I seriously never thought I’d see this day but 30 years is a remarkable achievement. Not one we could have achieved without the support and patronage of our brilliant audience. This celebration is for them as much as it is for our retirement funds.

In late 1985 Wayne Hussey and Craig Adams left The Sisters Of Mercy and formed The Mission and in early 1986 embarked on their first European tour, supporting The Cult. They released 2 singles independently, both reaching No.1 in the UK alternative charts, the first one, „Serpent’s Kiss“, being
the top selling independent single of 1986, before signing a worldwide record deal with Phonogram Records (now Universal).
Their first single for the new label, “Stay With Me”, went straight into the UK chart at No. 30 followed by their debut album “God”s Own Medicine” at No. 14. Over the next eight years the band released six more albums and enjoyed a further 13 top 40 singles including anthemic classics such as “Wasteland”, “Tower Of Strength”, “Beyond The Pale”, “Deliverance” and “Butterfly On A Wheel”. Total worldwide album sales to date have now well exceeded 4 million. During this period, The Mission enhanced their reputation as one of the best and most exciting live bands in the world winning countless accolades and inspiring both lurid media stories and a fanatical following as they toured constantly including highlights such as seven sold out consecutive shows at the Astoria Theatre in London (a house record never beaten), headlining the famous Reading Festival twice, and also playing with U2, The Cure and Robert Plant.
In 1994, the band parted company with Phonogram after a number of contractual disputes and signed their label “Neverland” to Sony Dragnet in
Europe. Two years and two more album releases later, the band decided to call a halt to the general craziness of their existence to seek respite and
well-earned solace.

In 1999, fully reinvigorated, The Mission reunited and after a few spectacularly successful early shows, embarked on a year long tour that saw the band visit places as far flung as Brazil, Argentina, Chile, Mexico, USA, South Africa, Greece (Recon 2000 tour), including memorable appearances at the Eurorock and M’era Luna Festivals and which culminated in a successful European tour in November/December 2000.
In late 2001 The Mission released what many fans consider to be their finest album to date in “AurA”. It marked the beginning of a contemporary and
exciting new era for the band and the welcome return of all of the band’s old swagger, relevance and confidence. The album reached No. 1 in the German alternative chart and stayed there for eight weeks. The band also embarked on a German tour as special guests of ”HIM” to coincide with the release of the album, quickly followed by their own very successful six-week tour of Europe in early 2002.
In April of that year, The Mission returned to South America for shows in Brazil, Argentina, Chile & Peru. This carried on throughout the summer and
the band played further successful shows in Spain, Portugal, Hungary, Ireland, Germany, USA, and the UK.
The band continued to tour throughout 2003 (Pilgrimage), 2004 (Breathen and Absolution) and 2005 (Lighting the Candles) with the interim periods also seeing Wayne working on several side projects including those with legendary Italian band, Votiva Lux, and the film Mercenario resulting in the limited edition CD Single “Breathe Me In”, which reached number one in the German DAC charts.
During the 2005 “Lighting the Candles” tour, a double DVD of the same name was released, the band’s first ever DVD release, to coincide with the tour. Packed with footage from live shows, video singles, archive and biography features, and behind the scenes footage, it has been critically acclaimed as one of the most complete video releases any band has released to date and was nominated in Germany for the equivalent of a Grammy. A remarkable achievement when it’s considered this was a self financed independent release and was nominated in the same category as new DVD releases by such artists as Madonna and Bon Jovi.
Early 2006 saw Universal Records release “Anthology – The Phonogram Years” – a compilation of some of the band’s finest work plus some rare and never heard before tracks, plus “Waves Upon the Sand / Crusade” DVD – a re-release of two Phonogram period Mission videos. Later followed by re-releasing the first four Mission albums, digitally remastered with bonus tracks and sleeve notes. All sold extremely well.
The Mission released their album ‘God Is A Bullet’ on SPV in April 2007. It would’ve been easy for the band to revisit past glories but they resisted.
The Mission recorded a ‘forward looking’ album that was both brave and adventurous. It’s a ‘guitar’ album full of swagger, confidence, good tunes,
and, in Wayne Hussey, a songwriter that was at the top of his game.

March 2008 saw The Mission close the curtain – for the time being at least, with Wayne Hussey disbanding the group to concentrate on solo ventures – with a sold out European tour which culminated with 4 shows at the London Shepherds Bush Empire. The band released ‘The Final Chapter’ DVD, which chronicled the the tour, and charted at number 6 in the UK DVD chart later that year.

2011 – And 3/4 of the original line-up of the band – Wayne Hussey, Craig Adams, Simon Hinkler – reformed with new drummer, Mike Kelly, to play a sold out European 25th anniversary tour which ended at London’s Brixton Academy, a show that was sold out a full 6 months in advance! Encouraged by the response of fans the band extended the tour to include South & North America and then went onto record, and release in late 2013, a brand new album, „The Brightest Light“, which garnered the best press reviews the band had received in years.
Armed by one of the most rabid fan bases in the world The Mission continued to excite the legions with a slew of successful shows and tours and have
continued to do so ever since. And now 2016 sees The Mission celebrating 30 years since they first set foot on the stage at the tiny Alice In Wonderland club in London and, to celebrate, the band set out on their most extensive and ambitious tour since they reformed in 2011 and will release a brand new album to coincide.
Keep the faith!

I momentarily cast my eyes to the back of the room to wonder at an entire room full of people with arms aloft in tribute to one of Britain’s most
under-rated, part-forgotten, yet best-loved bands of all time. James Wright – Pure Rawk, August 2015

The Mission have lost none of the passion and verve that had them rightly at the top of the live circuit tree. Dom Daley – Uber Rock, June 2015

Entering the darkened stage in a sea of dry ice, Wayne Hussey’s stage presence is a sight to behold. The sing-a-long from the crowd is obligatory
but it’s also testament to how great The Mission have become. A truly magnificent performance.
Stan – Backseat Mafia, June 2015

The Awakening on tour with The Mission 2016 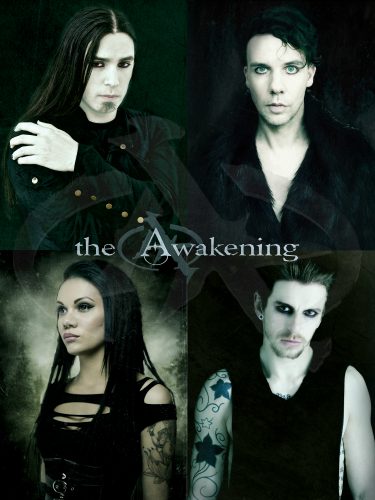 The Awakening will be the official support on the European dates of The Mission’s 30th Anniversary Tour this October. The US-based project of artist Ashton Nyte, originally from Johannesburg, South Africa, broke through with hits like “The Dark Romantics” and “The Sound Of Silence.“ The Awakening will be joining The Mission on 17 dates, including: The UK, Portugal, Spain, Italy, Switzerland, Germany, Poland, Slovakia, Austria, Belgium and Holland. Nyte said of supporting The Mission, „Last year I had the absolute pleasure of joining the inimitable Wayne Hussey on stage to sing ‘Butterfly On A Wheel’. It is a song I used to attempt on acoustic guitar in my bedroom as a teenager, and singing it with the man who wrote it was a dream come true. Supporting The Mission now, as they celebrate 30 years of releasing beautiful music, is one of the greatest joys of my career. The Mission was most definitely one of the bands that inspired and influenced the birth of The Awakening. The dream just became an exquisite journey.”