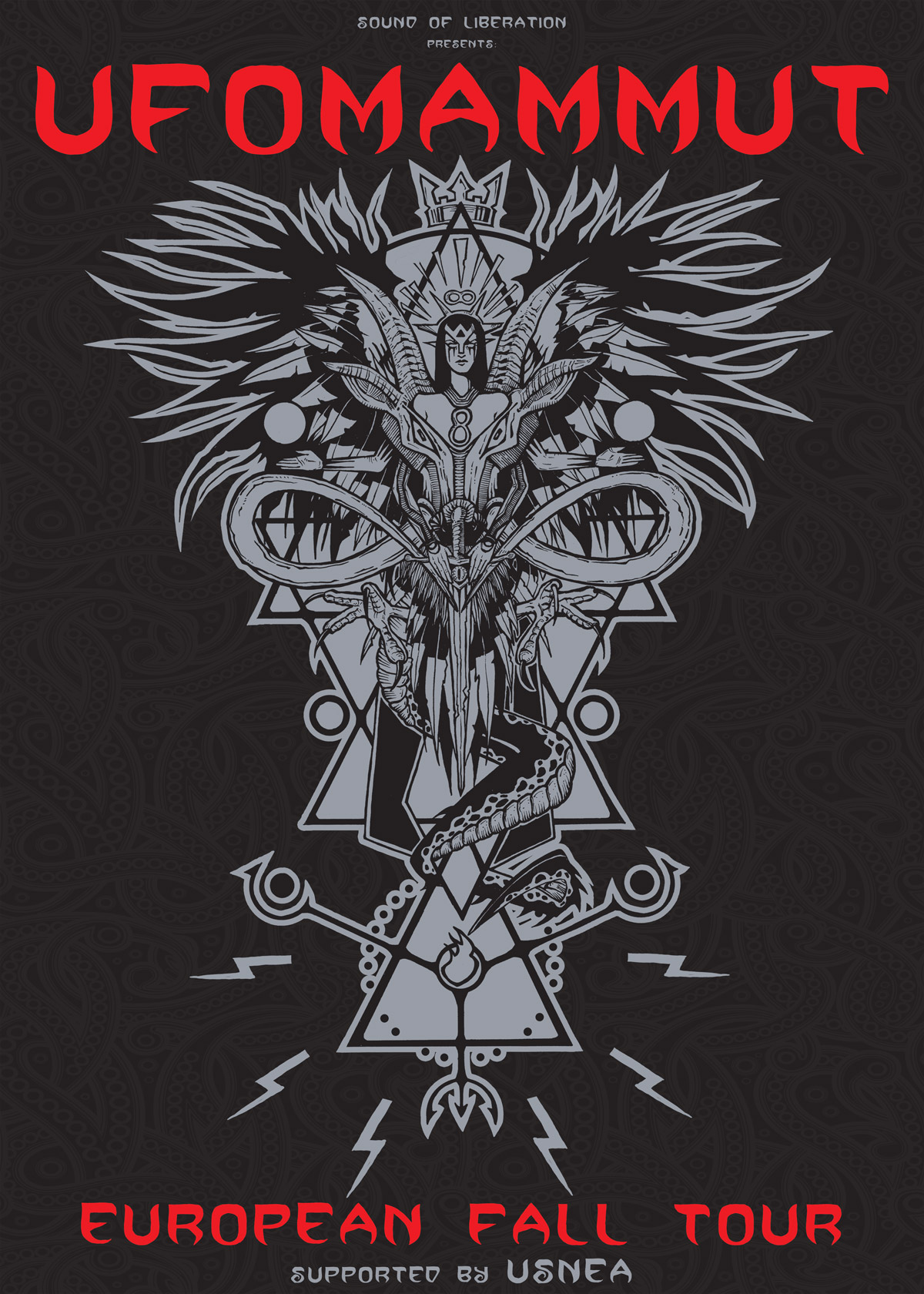 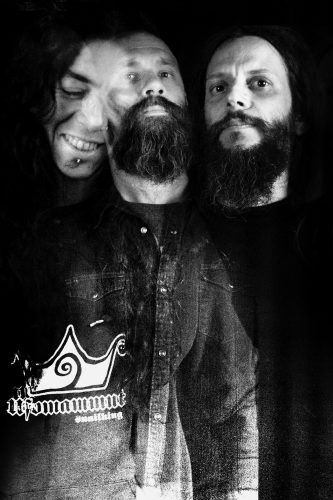 Ufomammut is a power trio formed  in Italy in 1999 by Poia, Urlo and Vita, a lineup that has remained stable since.
The trio have developed a sound characterised by lengthy songs centered on repeated heavy riffs coupled with droning vocals and the use of sound effects and synths.

8 is the Ufomammut’s 8th album, comprised of 8 tracks that flow into each other without interruption.
This flow can also be seen when you tip 8 horizontally, thus it morphs into the leniscate from algebraic geometry – ∞ – a plane curve that meets at central point – or more commonly known as the infinity symbol.
A continuous stream of movement reflective of the uninterrupted nature of the album but also the continued togetherness of the essential elements of the band – Urlo, Poia and Vita – since the beginning of the band’s history in 1999. ∞ tipped vertically sees us return to the number 8.
It must be stressed there is no singular pronunciation of the title, 8 is to be spoken in every language e.g. “eight” in Engish, “otto” in Italian, “acht” in German, huit in french and so on.
8 is a continuous flux of music, a singular entity, which can be defined in micro measurements by its 8 satellite songs.
Each track expands upon the preceding song, unfolding into an exceedingly dense and malevolent journey, resulting in this being Ufomammut’s most extreme venture yet, with no permittance for breathing space in the 48 minutes.

Ufomammut’s status as one of the most potent, powerful and artistic contemporary doom artists in existence continues to captivate the masses, and the band’s worldwide grasp grows wider with each release.
Ufomammut’s live show is supported by the internationally acclaimed video and graphic art of Malleus, a rock artists’ collective of which Poia and Urlo form a part, who conjure the entirety of Ufomammut’s visual impact. 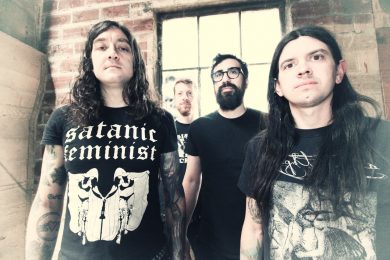 Usnea formed in late 2011 when Zeke Rogers moved to Portland, OR from Chico, CA leaving behind his posts in The Makai and Amarok; and Justin Cory and Joel Williams decided to collaborate in the wake of the demise of their previous projects Absence of Light and Dopesmoker. After rounding out the lineup by adding recent Portland transplant Johnny Lovingood on second guitar, they fine-tuned the material they’d thus compiled for a debut record. Their eponymous debut was recorded in mid-2012 at Haywire Studios with Fester and mastered by Adam Gonsalvez at Telegraph Mastering. Zeke’s label Orca Wolf Records released the first edition of the S/T album in February of 2013 as a single two song LP with a download of two additional tracks that the band decided not to press to vinyl at the time. Eternal Warfare released a cassette version of the S/T album containing all four songs in late 2013. The album was met with favorable reviews, the only gripe being that the other two songs did not find their way to the vinyl release. In response, the band teamed up with Germany’s Vendetta Records for a collaborative release of a second edition as a 2xLP featuring all four songs with Orca Wolf Records in early 2015.
Usnea embarked on a West Coast tour in May 2013 to support their first record followed by a short jaunt to Dead Fest in Oakland later that August with Stoneburner and Bastard Feast. In January of 2014, Usnea returned to Haywire to work with Fester again for a split 7” EP with Bielefeld, Germany crust band Ruins which was co-released stateside by Halo of Flies Records and in Europe by Germany’s Twisted Chords Records in June 2014.
After negotiating a record deal with Relapse Records, Usnea went back to Haywire and their close friend Fester to record the 2nd full length LP titled “Random Cosmic Violence”. In August 2014, Usnea toured the West Coast with Fórn (of Boston) and Augurs (of Oakland) in anticipation of the new record’s release. “Random Cosmic Violence” was released in November of 2014 and was met with an increased fanfare and appreciation of the band’s bleak and dark soundscapes.
In May of 2015 the band embarked on a 40 day US tour to support “Random Cosmic Violence” supporting Italy’s UFOMAMMUT on their first US tour after 16 years of being a band. The tour also brought Usnea to Maryland Deathfest XIII for a memorable night there with Yob, Conan, Jex Thoth, Mantar, Primitive Man and Iron Man. All of the shows were incredible and the band forged a close and lasting friendship with Urlo, Poia, Ciccio and Vita from Ufomammut.
In 2016, Usnea had the incredible honor of playing Roadburn and touring Europe in April and May afterwards, first alongside Australia’s INVERLOCH (Relapse labelmates and 2/4ths of legendary death doom band disEMBOWELMENT) and then the final week of dates with DRESDEN-LENINGRAD (from Amsterdam, NL). On the tour they played several other festivals including Void Fest in Germany and Barroselas Metal Fest XIX in Portugal.
After all of the touring for “Random Cosmic Violence”, Usnea took the rest of 2016 off of playing live to write and record their third record, “Portals Into Futility”. The new album was recorded February 2nd-9th, 2017; once again with trusted engineer Fester at helm and help from assistant engineer Andrew Grosse at Caravan Recordings and Haywire Studios in Portland, OR. The album was mastered by Adam Gonsalvez at Telegraph Audio because he did such a great job on the first album. With “Portals Into Futility”, Usnea have evolved into a growing dynamism and vocal maturity while maintaining the heavy crushing brutality, dissonance, anger, and mournful melodicism of their previous work. Release is set for Fall 2017 and in the meantime the band will perform at Northwest Terrorfest in Seattle in June and then at Psycho Las Vegas in August.